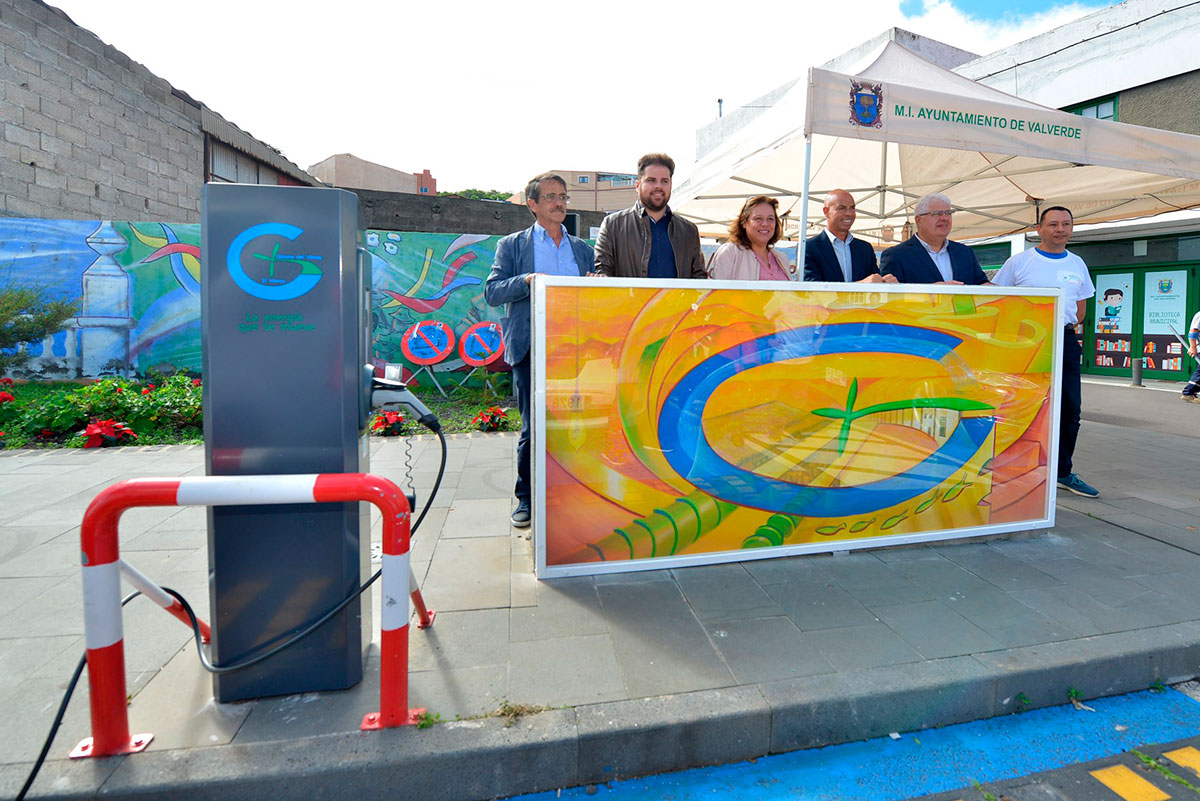 The event coincided with the VEA Tour presentation, an exhibition of electric vehicles organised by the Canary Islands Government’s Department for the Economy, Industry, Trade and Knowledge, with the aim of raising awareness of this type of transport.

The event coincided with the Canary Islands VEA Tour presentation, an exhibition of electric vehicles organised by the Canary Islands Government’s Department for the Economy, Industry, Trade and Knowledge, with the aim of raising awareness of the advantages of this type of transport among the population of El Hierro.

In his speech, Juan Pedro Sánchez claimed that “this initiative by Gorona del Viento, the company that owns the Wind-Pumped Hydro Power Station, represents a further step towards the objective of eliminating the use of fossil fuels, since the installation of these charging points will meet in full the demand of existing vehicles on the Island as well as those of tourists who choose to use this type of car”.

Mr Sánchez (Chief Executive Officer of Gorona del Viento and vice-chair of El Hierro’s Island Council) reminded those attending that sustainable transport is one of the key points of the Island Council’s Sustainable Development Plan. “We have made a strong commitment to the implementation of electric vehicles which will not only prevent emissions, but also provides a form of energy storage. If this project is properly managed, in the near future electric vehicles will become batteries that will be available on the streets of the Island,” he stated.

In his speech, Gonzalo Piernavieja highlighted the Canary Islands Government’s objective that by 2030 the number of electric vehicles will have reached 300,000, a figure that represents over 20% of the Archipelago’s entire vehicle fleet; this is consistent with a more sustainable energy model which also supports the fight against climate change and against dependence on carbon-based fuels.

In this context, he explained, there are plans to create a new line of support for the deployment of charging points in 2019. He went on to remind those present that during the coming months a bill will be presented to Parliament by the Canary Islands Government, which will include the introduction of tax measures to drive forward and further promote the deployment of electric vehicles in the Canary Islands. These measures include the abolition of the Indirect Canary Islands Tax for eco-efficient vehicles, such as hybrid vehicles, electric vehicles and bicycles.

Using clean energy sources, the Wind-Pumped Hydro Power Station has generated 60% of the electricity consumed on El Hierro so far this year. This represents a high percentage of penetration by renewable energies, leading to lower emissions of polluting gases and a reduction in diesel consumption. The use of electric cars will further reduce the demand for fossil fuels and (thanks to the use of the recharging facilities) will enable El Hierro to take even greater advantage of its excellent wind energy resources.

The charging points will be placed strategically around the Island, with three in the capital, two in El Pinar (in La Restinga and Taibique), and two further points in La Frontera (one in Tigaday and the other in Pozo de la Salud). Each semi-fast recharging point has 22 kW of power, which will recharge an electric vehicle in a short time and is compatible with the various vehicle models currently on the market. In addition, the energy supplied at these points will be free for the next two years. El Hierro joins the tour by electric vehicles.

A motorcade of vehicles

Prior to the launch of the charging points, the owners of the eight VEA Tour vehicles dealt with questions from visitors about the nature of these vehicles and their experience of using them. Later on, the motorcade organised in partnership with the Electric Vehicle Users’ Association (AUVE) toured various locations on the island.

On Sunday morning from 9.30 a.m., members of the public can visit a second exhibition in the Plaza de Tigaday, in the municipality of La Frontera.
The initiative, spearheaded by the Canary Islands’ Institute of Technology (ITC), is seeking to drive forward and to encourage sustainable transport in the Canary Islands; it includes a tour of all the Canary Islands—apart from Tenerife and Gran Canaria—in order to raise public awareness of those alternative forms of transport that make the biggest contribution to protecting the environment.