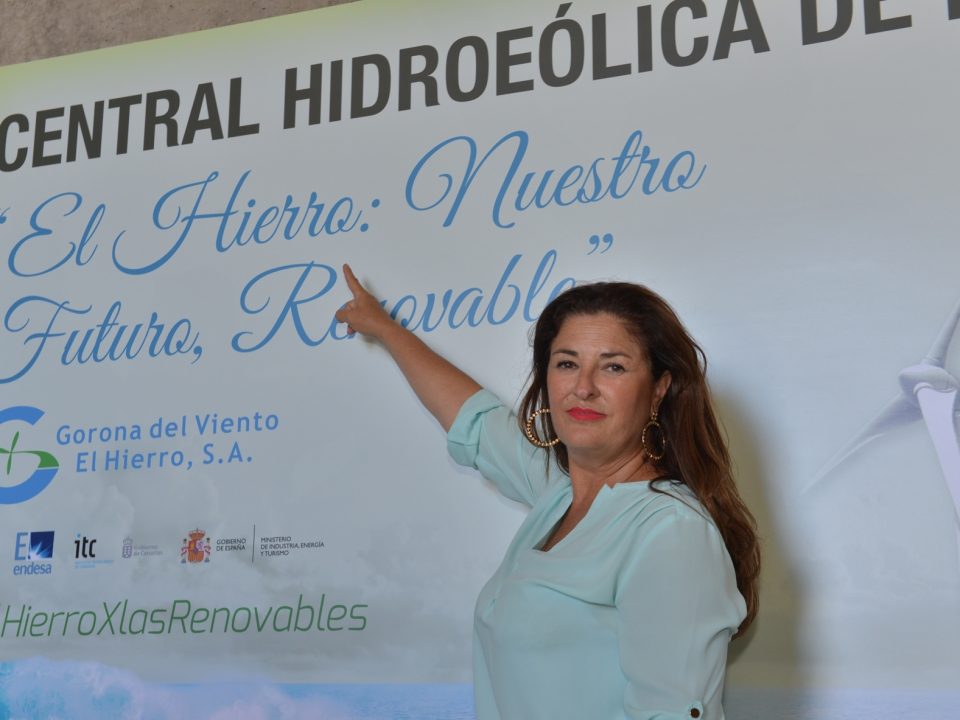 She claims that El Hierro has the cheapest electricity in the Canary Islands.
The Chair of Gorona states that income in relation to variable costs is €15.57/MWh—“eight times cheaper than the cost for the same item with pollution-causing energy sources”.

Gorona del Viento states that the cost of electricity from the El Hierro power station is the cheapest in the Canary Islands; this is in addition to its significant environmental benefits.

The public company that operates the El Hierro Wind-Pumped Hydro Power Station categorically confirms that this initiative, which is unique in the world (beginning as a pilot experiment in the use of renewable energies in a territory isolated in terms of energy supply, of which El Hierro is an example), has demonstrated in seven years of operation its viability from both a technical and a financial point of view.

The company (which is made up of the El Hierro Island Council, the Canary Islands Government and Endesa) is moving forward, contrary to a news item sourced by the EfeVerde organisation and published yesterday in various communication media. This article summarised the conclusions of a study by the University of Las Palmas, Gran Canaria, which claims that the price of electricity supplied by Gorona is double what the cost would have been from the island’s thermal power plant.

Belén Allende, Chair of Gorona del Viento and of the El Hierro Island Council, stated that the basis of the published study derives from an invalid comparison between the two power stations, since it had not taken into consideration the number of years the Llanos Blancos thermal power station has been in operation. The age of the Llanos Blancos plant makes it a fully written-off installation, whereas the Wind-Pumped Hydro Power Station has only been in operation for 7 years, which naturally affects the cost per year of guaranteed installed capacity.

“They also used other misleading information, because the company has not amortised the full €82 million invested in the project as stated in the published briefing, but only the €25.6 million in bank loans which enabled the power station to begin operating until it received its first payments. These began in 2015, but then suffered a significant reduction in 2017,” pointed out Ms Allende.

The Chair of Gorona stated that income in relation to variable costs is €15.57/MWh: “eight times cheaper than the cost for the same item supplied from pollution-causing energy sources. For this reason, we will continue our efforts to increase the proportion contributed by renewable energies towards the total energy required to supply the island of El Hierro, thereby guaranteeing a sustainable growth which also respects the environment”.
Belén Allende expressed regret that this information had not been refuted sooner, and that the researchers had not sought the help of Gorona’s engineers to explore in depth the El Hierro Wind-Pumped Hydro Power Station, which is unique, not only within Spain’s electricity supply system, but in the whole world.

“We start from a point where we know we are conducting a great scientific experiment at international level, with many positive aspects and other aspects which we need to improve in future, such as our storage capacity in the lower reservoir. That is just one of the reasons why we have recently signed a university research collaboration agreement to extend our knowledge of the energy-supplying potential of wave power, but we cannot accept headlines that take at face value inaccurate data regarding the financial aspects of the power station,” she stated.

Belén Allende pointed out that the Wind-Pumped Hydro Power Station supplied 56.5% of El Hierro’s electricity in 2018 from clean sources, that is, ten percentage points more than in 2017, to give an example of just one year. It also avoided the emission into the atmosphere of 2,700 tons of CO2, which means that El Hierro’s emissions of greenhouse gases fell by 26%.

Gorona pointed out that charges for electricity in Spain are regulated, that the National Commission for the Regulation of Markets and Competition is the body appointed to audit and oversee the income it receives (as is the case with any other energy producer) and that, as a public company, its data is available for access and scrutiny.

In conclusion, the Chair of Gorona stressed that it is absolutely vital that Gorona should serve as the starting point for studies and technical contributions that will help it to achieve its targets, by focusing on making it an example of the use of renewable sources that can be replicated in other isolated territories across the world.